Blog - Latest News
You are here: Home1 / Teachings2 / The Man From George Street

Carl’s Note: Many years ago the LORD called me to serve the believers of Australia, & as a result I have been invited there many times & personally walked & prayed along George Street near the Sydney Harbor. You will be inspired by the following true life story from Dr. Francis Dixon.

Your life & evangelistic witness makes a daily difference for eternity!

This story is a little longer than most of my Posts, (still only about a 5 minute read), but it’s worth the effort. -Brother Carl

“I was a widely-traveled pastor in England (from Lansdowne Baptist Church). One night in church I asked a man named Peter to share his testimony.

Peter got up and said, “This is how I was saved. I was in the Royal Navy.

“I was walking down George Street in Sydney, Australia and out of nowhere stepped a little old gray-haired man and he said to me,

‘Excuse me, sir, but could I ask you a question? I hope that it won’t offend you, but if you were to die today, where would you spend eternity? The Bible says that it will either be in Heaven or it will be in Hell. Would you think about that, please? Thank you, God bless you, and Toodle-oo!’

“Then the man left. I had never been confronted with that question – I couldn’t get it out of my mind; I got back to London, I sought out a pastor, and I became a Christian.”

Several weeks later we had a revival in the church and Noel, one of the visiting revival team, shared his testimony,

“This is how I came to know Christ. I was in the Royal Navy and I was walking down George Street in Sydney, Australia and out of nowhere stepped a little old gray-haired man. He said to me,

‘Excuse me, sir, but could I ask you a question? If you were to die today, where would you spend eternity?’

What he said bothered me and later, I sought out a Christian, and I was converted to Christ.”

Several months after that I was in the city of Adelaide in eastern Australia and I thought that I would share the testimony of Peter and Noel.

A man in the congregation jumped up waving his hands and said, “Well, I’m another – the same thing happened to me. I couldn’t get what he said out of my mind and I became a follower of Jesus.”

I then went to western Australia for a revival meeting and shared this story and afterwards a deacon of the church came to me and said,

“Dr. Dixon, I’m another, I’d never been asked that question, and later I prayed to receive Christ.”

I went back to my home church in England and shared about Peter and Noel and the man in Adelaide and the deacon from the western part of Australia. When I finished, a young lady came up to me and said, “Pastor Dixon, I’m another, this man said the same thing to me and later I became a believer.”

Several weeks after that, I was attending a conference in northern England where I shared this growing story.

Afterwards, a man came up to me and said, “Dr. Dixon, well, I’m another. I was on a business trip to Sydney and this obnoxious, spiteful little man stepped out of a shop doorway, offered me a religious pamphlet, and accosted me with a question,

‘Excuse me sir, are you saved? If you die tonight, are you going to Heaven?’

“I tried to tell him I was a Baptist Elder. He wouldn’t listen to me.

“I came home and told my pastor, thinking he would sympathize, but he agreed! He had been disturbed for years knowing that I didn’t have a relationship with Jesus…and he was right. I made Jesus my Lord and Savior!”

A year later I went on a world speaking tour and one of the stops was India. I was at a missionary conference and spoke on the topic of personal evangelism.

I thought to myself, “What a perfect illustration!” I went through the story and afterwards a missionary came up to me and said, “Dr. Dixon, I’m another, it happened the same way for me and I trusted Christ soon after.”

After India I went to Jamaica. I was at a meeting with a group of pastors. I shared this story with them. A pastor came up afterwards and said,

“Excuse me, Dr. Dixon, I’m another, the exact same thing happened to me and later, I was converted and went on to seminary.”

Next I stopped in Atlanta, Georgia to speak at a Naval Chaplain convention. Here for 3 days I spoke to over 1,000 Naval Chaplains.

Afterwards the Chaplain General took me out for a meal and I asked the Chaplain how he became a Christian. He shared that he was a reprobate drunk in his days in the Service, and while doing exercises in the South Pacific, they stopped in Sydney Harbor.

“I got off a bus on George Street, blind drunk, and this ghost-of-a-man jumped out in front of me, pushed a pamphlet in my hand and said,

‘Sailor, are you saved? If you die tonight are you going to Heaven?’

“The fear of God hit me immediately.

“I was shocked sober, ran back to the ship, and sought out the Chaplain. He led me to Christ. I soon began to prepare for the ministry under his guidance. I am now in charge of 1,000 chaplains who are bent on soul winning.”

Well, do I need to tell you where I went next?

I went to Sydney, Australia.

I sought out a Christian friend of mine and told him the stories and asked if he knew a little gray-haired man on George Street?

“Oh, yes! Everybody knows him. That’s Mr. Frank Jenner. But he’s very old now and he’s in the hospital confined to his bed.”

I asked my friend to take me to Mr. Jenner. We went to the hospital and I introduced himself. As I was giving specifics of each story, Mr. Jenner began to weep. 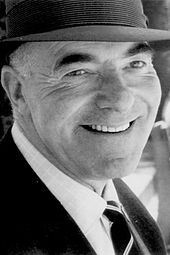 “When I came to Christ, I promised Him that I would share Jesus as a simple witness to at least 10 people a day. In my retirement years, the best place to do this was George Street. I got lots of rejections, but a lot of people courteously took the tract.

“In over 40 years of doing this, Sir, I have never heard of one single person coming to Jesus…until today.”

–A true account, shared by Dr. Francis Dixon before his death, 1985.

*To watch my new Love Speaks Documentary Film Series with many intriguing stories from Salvation-History like this one, please visit

Are you ready to begin to recognize the voice of God the Father? Carl's gift of his eBook will help!

Hearing the Voice of Our Father

If you’re like most of my readers, you are growing in your ability to hear God's voice & you long to hear the Father Himself. Jesus heard Father's voice every day. You can too!

Join thousands of others by subscribing to my Listener Updates eLetter & getting this FREE eBook called, “Hearing the Voice of Our Father.” By subscribing you will also stay up to date on my blog posts.

Visit our Store for further resources!

Real X-Ray Vision: the gift of discerning of spirits